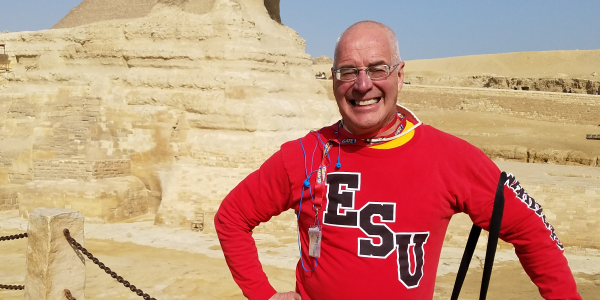 As Maury Molin '76 tells it, it all goes back to the fall semester of his senior year at East Stroudsburg State College.

"I paid for the entire semester, but I didn't have enough money for spring," said Molin, who had, up until this point, paid for his entire education by himself.

Then his aunt told him that his grandmother had taken out savings bonds upon his mother's passing when he was 20 months old. Since Molin's grandmother also had passed away, he asked his father for the bonds, who said he was saving them to give to his son when he graduated.

Molin told his father he would not graduate at all without paying for the final semester, so his father agreed. After paying his tuition, Molin had $10 left.

"When I look at that and know the power of leaving something, I know that it's important to help students complete their education," he said.

"I love football," Molin said. "I was at Denny Douds's first head coaching game, and I've only missed 10 home games in 45 years. Now, Jimmy [Terwilliger] is head coach, and I taught Jimmy, so there is a special part of my heart for football."

Molin has connections to the other scholarships he created, too.

"I attended men's basketball games regularly in the early '90's. Coach Jeff Wilson put out an appeal, and since I was a supporter and very vocal, I thought, why not?" said Molin.

Also, Molin was an assistant track coach at East Stroudsburg South High School where he taught social studies. Molin is retired now but is so loved by his students that he has attended more than 50 of their weddings.

In 2019, Molin made a pledge to bequeath a gift to East Stroudsburg University upon the maturity of his life. He has done the same for his high school, Pottsville Nativity, in Pottsville, Pa.

"When I came to ESU, I knew I wanted to be a social studies teacher. James Henwood, John Muncie, and Bill McFadden all took me under their wings and saw I had the potential," Molin said. "They took a chance and gave me a chance to succeed. They took the time and gave me guidance. They were people who believed in me, so looking back, I owe it to the university."