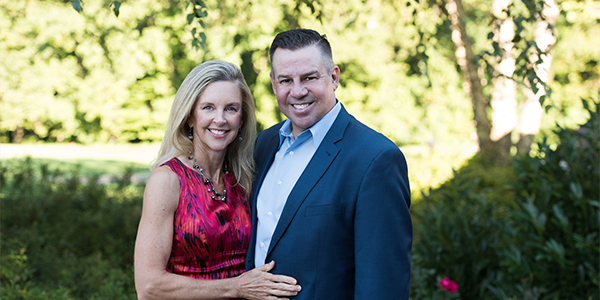 RELATIONSHIPS FORGE THE WAY TO GIVING BACK

Dr. Charles "Chuck" Taylor '84 M '86, a computer science major, is inspired to give back to East Stroudsburg University to show appreciation to the school and academic department which are the foundations of his success.

The newly established Charles T. '84, M '86 and Teresa M. Taylor Endowed Scholarship is designed for a computer science major who aspires to work in the Department of Defense/intelligence community.

"My wife Teresa and I believe philanthropy comes from the heart. We enjoy giving to organizations which have enabled us to be where we are today," said Taylor, former founding president of Proteus Technologies, LLC, and former executive vice president of Polaris Alpha. Both companies specialized in building custom applications for the Department of Defense and intelligence community.

During his time at ESU, Taylor learned the importance of building strong relationships to be successful. One of his most pivotal relationships began his freshman year when he met computer science Professor, Dr. Richard Prince.

School didn't come easily to Taylor and he struggled with his first computer science classes. He remembers spending most evenings working on assignments in the computer room on the fourth floor of Stroud Hall. For one particular programming assignment, Taylor broke down in tears in his third-floor Shawnee Hall dorm room.

He sought the help of Prince. "I remember sitting in his office, and his phone was ringing. It was his wife, Dr. Debbie Prince (former mathematics professor at ESU), saying that dinner was ready. Dr. Prince said, 'I have a student here with me,' and he didn't go home. He was more concerned that I understood how to complete the assignment," Taylor said.

Taylor had Prince for eight more semesters over his years at ESU, which spanned undergraduate and graduate degrees. Throughout his academic career, Prince was the most challenging professor Taylor ever had, but also the one that pushed him to learn the most.

"I remember handing in 2,000 lines of source code for an assignment. Professor Prince took the time to read every single line and point out where I could improve. He was a brilliant, kind, good person. I truly wish more people would have had him as a professor before he passed away," said Taylor, who still exchanges Christmas cards with Prince's wife every year.

After completing his undergraduate degree, Taylor became one of the first two graduates of the university's Computer Science Master's program in 1986. He earned his Ph.D. in computer science from Lehigh University in 1990.
Taylor used the foundations that he learned through Dr. Prince and his time at ESU to become a reputable leader in his field.