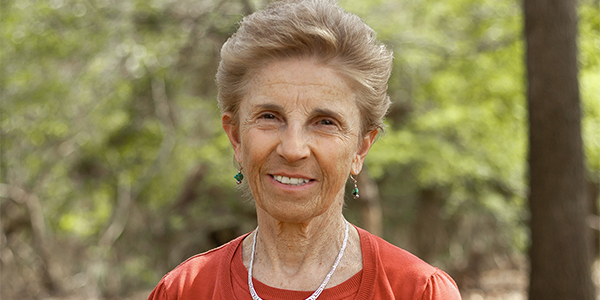 With a firm grounding in science from ESSC, Deborah Gebhardt '69 takes her career - and life - in many directions.


If you've ever met Deborah Gebhardt '69, you might say she's done it all in her career - literally.

That's because Gebhardt, who has a doctorate in biomechanics and anatomy, is nationally-known in the field of developing physical performance standards and medical guidelines for jobs ranging from police, firefighters and pipeline workers to homeland security staffers and the military.


She started a company, Human Performance Systems Inc., out of her house in 1988 and the work took her all over the United States as she tried doing the jobs she was evaluating.

"I've ridden on firetrucks and police vehicles for many agencies," she says. "I've been on Navy ships and natural gas pipeline platforms in the Gulf of Mexico. I went to pole climbing school for AT&T. I've gotten to do a lot of fun things."

And that's her second career. A couple of years after graduating from what was then East Stroudsburg State College, Gebhardt taught physical education and coached at two universities just as Title IX was changing the landscape for female athletes. At University of California at Berkeley, she coached the women's tennis team and basketball team in the early 1970s and then coached women's basketball and tennis teams at Purdue University after joining the physical education staff in 1973.

It seems Gebhardt, who now lives in Adelphi, Md., has always been in motion. She grew up playing sports in her hometown of Hazleton, Pa., as the oldest of four children born to a small businessman and a homemaker. She has two brothers and lost a sister who died at age 23.

"I grew up in a neighborhood of all boys, so we played baseball and football and there was lots of snow, so you went sled riding [in the winter]," she recalls.

Neither of her parents went to college but Gebhardt said she and her brothers always knew they were college bound. She picked East Stroudsburg because of its strong program in physical education.

She played basketball in high school but didn't make the women's team at East Stroudsburg.

"I was too short and not good enough," she recalls, chuckling. "So I went out for swimming."

Gebhardt had never participated in competitive swimming, but received encouragement from an older classmate.

"In those years when you arrived [to college], besides the beanie that you had to wear -- they assigned you a Big Sister," Gebhardt says. "It turns out my Big Sister had placed sixth in the Olympic Trials for backstroke in swimming. She said, 'Oh, come out for the swim team,' and I said, 'but I've never swam competitively.' She said, 'don't worry, we take everybody.' So, I swam for four years."

Gebhardt also played on the tennis team for four years, singles and doubles, and participated in the synchronized swimming club.

She credits East Stroudsburg with giving her vital grounding in the sciences she would need in graduate school and later in her career.

"The classes were pretty rigorous," she recalls. "It had a real heavy science emphasis and it prepared me well for what I did afterwards. It was a very good education for what I liked."

After obtaining a bachelor's degree in health and physical education, Gebhardt got her master's in kinesiology at University of Arizona before taking a teaching and coaching job at University of California at Berkeley.

She entered the coaching field as Title IX was beginning to revolutionize athletics for girls and women. Before it was enacted into law in 1972, most public schools and colleges had few sports teams for females and those teams used second-class facilities and equipment, with none of the advantages that boys' and men's' teams enjoyed. Title IX sought to bring parity to athletics.

But equity wasn't achieved over night. Most women's sports at universities such as UC Berkeley and Purdue fell under the auspices of the recreation department, rather than the athletic director.

At UC Berkeley, her basketball team played in a gym where the walls were three feet from the end of the court, making it so players were one fast break away from injury.

"It took years - I mean years - to get women's sports to where they are now," Gebhardt says. "We literally had to drive a van or a car to all the different events. The coach drove the car."

So it was especially sweet after Gebhardt went to work at Purdue that she coached the first women's basketball team to play at the university's 17,000-seat Mackey Arena during the 1974-1975 season.

Gebhardt liked coaching, but she also knew it was not what she wanted to do for the rest of her life. She left Purdue in the mid-70s and went to University of Maryland to get her doctorate in biomechanics and anatomy. While she was finishing her dissertation for her Ph.D., Gebhardt worked for a company that evaluated jobs to develop physical and cognitive selection requirements. She also taught at George Washington University before deciding to start her own company, Human Performance Systems.

"It is daunting to step away from a full-time job where someone else is paying you," she says. "I took a chance and ended up learning about taxes, payroll and contracting. But I went into to it with the attitude that McDonald's is always hiring. If it didn't work I could make ends meet by going to McDonald's for a while until I found something else. Luckily for me, everything worked out really well."

Her field grew dramatically and so did her business, receiving contracts from Fortune 500 companies, branches of the military and federal, state and local governments. The number of employers who sought guidelines for the physical and medical requirements of a job continued to increase, especially after the Americans with Disabilities Act passed Congress in 1990.

Gebhardt explains the work this way: "Let's say you're a police officer or a firefighter and you're driving under lights and sirens. It's not good for you to have a seizure under those circumstances because you're going to cause an accident. So if you have a seizure disorder, we need to address the individual's symptoms, treatment regimen, and function, to determine whether the individual can perform the job without undue risks to others and oneself."

Todd Baker, Ph.D., who worked for Gebhardt for 25 years, says she is highly respected in the field in part because she was game to try any job.

"There are many people who will go out there and stand off at a distance and watch, but not Debby," Baker says. "She not afraid to get her hands dirty and she will try anything. She's nationally-known for doing these types of assessments."

Baker, an industrial organization psychologist, recalled one job in which they were evaluating the physical requirements for laborers who work on railroad tracks.

"These are your stereotypical rough men out there," Baker recalls. "And here she comes, all 5'4", 115 pounds, willing to pick up a spike mall and drive spikes and do all these things. She's doing that and these guys are just loving it, showing her all of what they do. So these guys are onboard and they're giving her all the information she wants to collect."

In 2015, Gebhardt sold Human Performance Systems to the nonprofit Human Resources Research Organization (HumRRO), but still does some work for the group as a principal scientist. She is also a fellow in the American College of Sports Medicine and the Society of Industrial and Organizational Psychology, and has received accolades for her work in the field.

Even in semi-retirement, Gebhardt keeps finding new challenges. Before getting knee replacement surgery, she competed in triathlons and ran 13 Boston Marathons (her best time: 3 hours and 15 minutes).

After the surgery in 2014, she switched from running to bicycling. At an age when lots of people see a two-mile walk as a nice way to exercise, Gebhardt still does 100-mile bike rides, known as "a century."

"The first one I did is called The Civil War Century," she says. "The only reason I did it was I bicycled around Gettysburg and the battlefield and thought that would be a nice one to do, the scenery is great here. The problem is it included climbing 7,800 feet. When I was done, I was ecstatic."

This year Gebhardt is taking on a different kind of challenge. She is a member of the Class of 1969 Reunion Committee for ESU as the class celebrates its 50th anniversary during Homecoming Weekend, October 18-20, 2019. Plus, she is in the process of creating the Deborah Gebhardt '69 Endowed Scholarship.

"I was fortunate I didn't have to have a scholarship to go to school," she says. "But I know there are a lot of people who do and I value education very highly. The more education you have, so to speak, the better off you're going to be in life.

"I received such a good base from East Stroudsburg I just felt the need to give back. I look back and I had a wonderful education."

Gebhardt said if she were advising ESU students today on careers she would encourage them to be open to taking on new jobs or tasks.

"Take advantage of any opportunity that you might get," she says.

"Think about whether you can do it and then work hard to accomplish the challenge. It opens up new avenues that you probably never even knew existed."